Have you ever dreamed of seeing the northern lights? Probably everyone dreams of seeing this magnificent natural phenomenon with vivid eyes.

Thanks to this guide, we will explain the best location and reason for seeing the northern lights.

Probably, Abisko is the best place in the world to see the northern lights. If you want to know how to get Abisko, you can read our Abisko Travel Guide.

But there is special thing for Abisko that its own microclimate.

Thanks to this microclimate, Abisko has the driest air in Scandinavia. The mountains and lake around it are pushing the clouds and a cloudless sky appears over Abisko.

Clouds carried to the Norwegian coasts with the wind are stuck in the obstacle of the mountains in Abisko National Park on the Norwegian border of Sweden. Abisko, located just below the Aurora oval, and its surroundings, has more cloud free nights than any other destinations in the Arctic Circle.

An average of 100 people live in the village of Abisko, and it is possible to watch the northern lights dance when you step out of your hotel in its simplest form. However, we find the best spots in and around Abisko. On our tours in Abisko, we offer you the best experience to see the northern lights.

You can not even imagine how fast the weather changes in the Nordic countries, especially above the Arctic Circle.It is quite normal for the weather to change from the sun to the snow in 5 minutes.

Snow and rain affect the northern lights quite negatively. The clouds created by these weather conditions prevent you to seeing the northern lights during these storms. The dry air of Abisko minimizes these precipitation. Cloudless weather can be observed in Abisko even in case of snowfall in an area a few kilometers away.

The northern lights, which are seen as a result of sudden cessation of the snow that continues during the night and the scattering of the clouds within 5 minutes, are the most important part of Abisko’s microclimate.

One of the most special aspects of the northern lights experience you will experience in Abisko is that it is far from crowded. Again, in Abisko, the situation of sharing this special experience with many people, which is experienced in dense and crowded destinations where tourists go, is not seen.

In all our tours, we observe the northern lights on the frozen lake, on the hills in the national park, in the fascinating view of the fjords in small groups. Even the fact that it is free of crowds brings the experience of the northern lights to the highest level with our tours in Abisko.

You will definitely hear the name of Abisko in the respected travel platforms of the world such as National Geographic and Lonely Planet.

According to some, Abisko is also known as the northern lights capital of the world.

What to Wear in the Arctic Circle 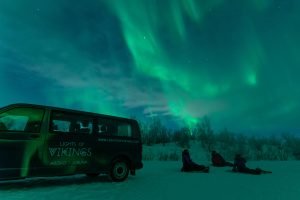 WHAT IS LIGHTS OF VIKING’S LONGEST TOUR CONCEPT ?