How to reach, where to stay, when you should go to Abisko?

When you make a search about the northern lights on the internet in any way, the name Abisko definitely comes across you.

But did you know that Abisko is a place 200 kilometers above the Arctic Circle where only 100 people live?

First of all, you can read our other article, “where is the best place in the world to see the northern lights?”.

Abisko is located in the northwest of Sweden, in the middle of Norway’s Narvik city and Kiruna city of Swedish Lapland. The village, which is affiliated to Kiruna Municipality, is on average 30 kilometers to the Norwegian border.

The capital of the northern lights of Swedish Lapland, actually consists of 2 areas next to each other, Abisko National Park and Abisko Village.

Abisko National Park, which lies on the banks of Lake Tornetrask, also is part of 440-kilometer Kungsleden hiking route. For this reason, the park is visited by professional hikers all year round.

The only settlement in Abisko National Park is STF AbiskoTurisstation. 400 people can stay in the most popular hotel of the region.

The population is 100 and there are 4 hotels. There is also a large supermarket in the village.

Why is Abisko so popular?

Abisko has a very intense tourism in both seasons. In the period from September to April, tourists from all over the world flock to the region for the northern lights.

Especially in the period between October and May, it is possible to do winter tourism activities such as dogsledding and snowmobile in this fascinating geography. We offer you the best experience to see the northern lights and snowmobile on our Abisko holiday packages.

Abisko, which has the driest air of Scandinavia, is a perfect destination to experience the northern lights with high number of clouds free nights. In the summer months, especially hikers and nature enthusiasts (mostly from Scandinavian countries) experience the midnight sun.

How to go to Abisko?

Another reason that makes Abisko popular is its transportation is very easy. After your flight to Stockholm, the capital of Sweden from many countries of the world, you can have domestic flight from Stockholm to Kiruna. Kiruna Airport is only 1 hour away from Abisko.

SAS and Air Norwegian are the companies that operate flights from Stockholm to Kiruna year-round.

If you are looking for more adventures, you can reach Abisko directly from Stockholm after an average 20-hour journey by the Arctic Train.

If you are coming via Norway, it takes only 1.5 hours by train between Narvik (Norway) and Abisko. Abisko National Park’s train station stop is Abiskoturiststation, Abisko village’s train stop is Abisko Östra.

Where to stay in Abisko?

Although it has a small population, the variety of accommodation is quite high.

If you want, you can stay in one of the hotel, hostel or chalet options of STF Turiststation in Abisko National Park or you can choose Abisko Guesthouse, Abisko Net, Abisko Mountain Lodge or Abisko Hostel in the village.

When you should go to Abisko?

It is quite difficult to answer this question. In fact, this question may vary completely according to your wishes.

However, it is really impressive to experience the wonderful colors of nature with the northern lights in September and October. (with less or no snow)

The polar night period from the beginning of December to the middle of January offers you a completely different experience. During this period, the sun never rises above Abisko, and the area becomes dark.

Another special experience is the midnight sun from June to July. It is extraordinary to watch the sun rising from midnight during this 22-hour daylight.

A COMPLETE GUIDE TO THE NORTHERN LIGHTS 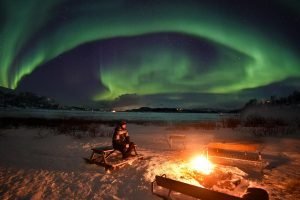